I grew up watching the Brady Bunch [and I loved those people].  My sister and I saw every rerun,  many times throughout our childhood.  Persons born in the late 60s or early 70s most likely remember a song the Brady kids sang, featuring Peter (middle son), whose voice was changing:  Time to Change.  The chorus lyrics state,

when it’s time to change, you’ve got to rearrange,
who you are into what you’re gonna be.

Really, we need more music like this today, don’t you think?  Okay, maybe not. . . . .
I’ve been thinking a bunch (I had to use the word bunch, because of the Brady reference above! [get it?]) about change because, well because my life tends to be in a constant change.  Well, maybe not constant, but at least in this sort of repeat cycle.
Two years ago, at this time of year, my husband left his job as a pastor.  Our son was in marching band, not exactly having the time of his life.  Our daughter had just begun middle school, facing the barrage of emotion that brings.
Today my husband has twelve days left in his current position as a pastor.  Our son is in marching band, not exactly having the time of his life.  And. . .our daughter, after successfully navigating through 2+ years of middle school, faces a decision on where to attend high school.
The more things change. . . . . . .
Two years ago, at this time of year, my workplace received word that we’d received a federal grant that would keep us operating.
Yesterday, my workplace (mind you, not the same place as two years ago), received word we received a federal grant that will keep us operating.
The more things change. . . . . . .
This very week, my wiser than his years son, laid out a plan for his life.  Mind you, he’s 16, so the plan didn’t cover the next 50 years, but it did cover some pretty significant changes in his life and the direction he believes he’s to follow [college choices and majors, career goals, changes in musical instrument focus].
Also, yesterday, my husband laid out a plan for our family regarding a significant part of our existence.  We haven’t had the chance to finalize the plan, or hear each member’s feedback, but it’s a plan nonetheless.  A plan that if followed, will take us down a new path.
So maybe, just maybe, we can this time break the mantra. . . .
The more things change. . . . . .
Wouldn’t it be nice if:
The more things change, the more things stay the same, the better things got?
I like this: 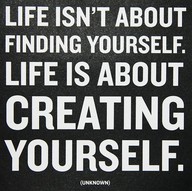 But I think if I could, I’d take out creating yourself and replace it with
letting God create you.
A new day is a chance to begin [one more time, with feeling] at the starting point.

Isaiah 42 {The Message}
5-9God’s Message,
the God who created the cosmos, stretched out the skies,
laid out the earth and all that grows from it,
Who breathes life into earth’s people,
makes them alive with his own life:
“I am God. I have called you to live right and well.
I have taken responsibility for you, kept you safe.
I have set you among my people to bind them to me,
and provided you as a lighthouse to the nations,
To make a start at bringing people into the open, into light:
opening blind eyes,
releasing prisoners from dungeons,
emptying the dark prisons.
I am God. That’s my name.
I don’t franchise my glory,
don’t endorse the no-god idols.
Take note: The earlier predictions of judgment have been fulfilled.
I’m announcing the new salvation work.
Before it bursts on the scene,
I’m telling you all about it.”