The Indian arrived on Tuesday.  I know, I know.  The correct term is Native American.  But, beings I am 1/16 Native American, I feel it’s okay for me to call him an Indian.  Plus, as long as the American League continues to refer to the baseball team in Cleveland as the Indians, why can’t I use the label? 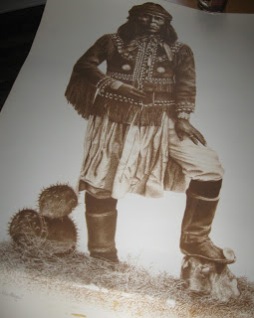 The Indian I am referring to is actually a piece of art.  A drawing of an Arizona Apache.  My parents have the same print in their home and have for years.  It was a gift given to my father and some of his fellow workers at a ranch where he did summer work.  He was a teacher in the days when teachers didn’t make a lot of money and for many years worked a summer job.  But that’s another story.

Today’s story has to do with why we have the print and the thoughts it stirs in me.

My son Jamie took a liking to the Apache print so I asked my parents to try and locate another one.  After phone calls to quite a few people, they found a friend who had a copy.  It’s numbered, signed and  was living in someone’s storage room.  On Tuesday, it became my son’s.  We have yet to frame and mount it, but we’ll get to it.

You’ll note the Apache is wearing moccasin type boots.  The mocs remind me of the saying,

Don’t judge a man until you’ve walked a mile in his moccasins.

I recently read about the “fundamental attribution error”.  Basically we tend to judge people’s actions and base them on what we deem are their character traits, as opposed to realizing their actions might in fact be due to their particular circumstances or situation.  In turn, we recognize our own personal actions’ relation to our circumstances.  We are easier on ourselves, justifying our actions.

I’ve seen this on Pinterest a few times, and although there’s much truth to it, it doesn’t take into account the fundamental attribution error:

While we shouldn’t act like a jerk, perhaps something absolutely rotten, beyond our control, has recently happened, and we just can’t simply “be nice.”

Another term for what I’m talking about is what author Gretchen Rubin labels, “cutting people slack.” More famous than Gretchen, author Flannery O’Connor, called it, “find explanations for charity.”

We live in such a reactionary society.  If someone does something we deem as rash, we’re ready to jump all over them.  Maybe we need to find out what’s making them tick.

I can be judgmental.  I can stereotype and assume.  Yet, I shouldn’t.  To be generous and loving I have to cut people slack.  I have to be willing to walk a ways in their mocs.  We are in the season of Epiphany, which is the season of light.  I need to be willing to let Light [as in God’s Light] shine on me and illumine what’s dark and hidden, in turn bringing His Light to others.

yes I cried this morning...she says “I’ll be back” and I know of course she will, but it’s still hard to say goodbye...kind of an end of an era after a whole lot of years of orchestra auditions, concerts, trips, drives, celebrations, book club, girls group, job interviews, talks, moves, volunteering, eating and hanging out...so proud of the courageous young woman I’ve watched @amy._.lyon become...bon voyage Aimee! #kidsgrowup #goodbyedoesntmeanforever #bittersweet
%d bloggers like this: