Returning home after vacation has been a difficulty for much of my adult life.  It’s not that my life is awful or that I dislike my home.  In fact, most days if asked what I prefer, I’d answer ordinary life, i.e. not surprises or big events or long lists of activities.  Simply living the routine is what I enjoy the most.  Yet, despite all that, I’m usually a bit off when I try to get back into the swing of things after a trip or extended time with the family.  We arrived home late yesterday afternoon from a camping trip in Pipestem State Park, West Virginia.  It was a lovely time.  A refreshing, uplifting for the most part, few days of nature and beauty.  Yet this morning I awoke early, with a sense of dread over getting up and getting going.

This morning I felt old, blah, almost unwell.  Not sick, not exhausted, there wasn’t anything specifically wrong.  Then I decided to count.  I looked at a calendar on our refrigerator while unloading the dishwasher.   Today is July 8 and I counted how many days there are until my birthday, August 7.  Obviously, we’re looking at a month, but my brain doesn’t function super well in the morning and I wanted to see if it was an even 30, or maybe 29 or 31 due to how many days are in the month, etc.  I counted 30.  Today I am thirty days away from turning forty five.

So far, the most difficult birthday of my adult life was my thirtieth.  My second child, my daughter Allie, was born just under two months before I hit the big 3-0.  We had recently moved into a new home, one that we had built.  My son was three.  Nothing crazy was happening, but the infant stage was not my favorite of the early childhood years.  I was stressed, tired, and we lived in Memphis, which is not a comfortable place to live in August, weather wise.  I suppose thirty is settling.  It came with a realization that I was truly an adult.  I had a husband, two children, and we were newly past some extremely wrenching family circumstances.  We were facing much redemption – spiritually, financially, relationally, maritally.  And I suppose in many ways reaching thirty was the top of a mountain for me.  It had been a long, hard climb and was in many ways, like finally crossing a long awaited finish line.  Yet, like most pivotal points reached in life, much emotion was involved.  Plus, I’m sure pregnancy hormones had much to do with it too!

Now, as I look head on at 45, I’m struggling.  If I’m like most people, I have approximately twenty years until retirement, give or take a few.  This brings up all the questions of accomplishment career and work wise.   Unless I live to be 90, I’m past the mid life point.  Which brings to mind the myriad of health concerns that loom.  I recently went to the doctor, which entailed the usual weigh in then being left in a room with the charts.  You know?  The charts that list height and weight and help one determine if she’s overweight.  I could stand to lose at least twenty pounds.  That’s a bit disturbing as I am already a vegetarian and don’t feel like I’m a zealous over-eater.  Plus I’ve been running fairly regularly with my daughter.

Thanks to Brain Pickings, Maria Popova’s always wonderful sight, this morning I read something that inspired me, a little anyway.  It’s written by Debbie Millman, which is good on two levels [for me, anyways]:

1. Someone named Debbie M. [my name] can be successful and 2. Even successful people have regrets and struggles and questions.

I find myself considering I don’t have to accept growing older as the doldrums.  I can invent and create.  And reinvent and recreate. 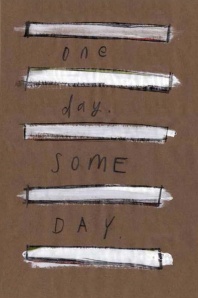 If you imagine less, less will be what you undoubtedly deserve. Do what you love, and don’t stop until you get what you love. Work as hard as you can, imagine immensities, don’t compromise, and don’t waste time. Start now. Not 20 years from now, not two weeks from now. Now.

I suppose the above quote doesn’t have to only apply to being creative.  Really, it works with anything.  Any goal or dream or hope.