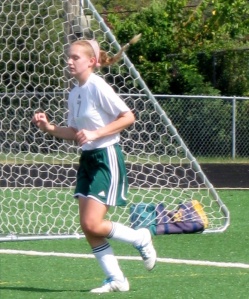 My daughter, at fifteen, is old enough to determine whether she takes a compliment to heart.  For example, if I tell her she looks nice she may or may not truly believe it.  She has her own standard and measurement of whether she looks good or not.  Another example.  She is on her school soccer team.  She is intelligent enough to know if I make a positive comment regarding her play in a game whether it is accurate or what she expects of herself.  She is fairly hard on herself and I’ve found I don’t always know if my positive reinforcement gets through.  Hence one of the difficulties in parenting a teenager.

She is in the top 3% of her high school class.  Despite being proud of her for that accomplishment, much of her academic abilities come naturally.  Sure, she works hard and pushes herself.  But she could get by alright without doing so.  Therefore, while I congratulate her on her school achievements, I don’t go on and on.  That would be overkill and ridiculous.

I have noticed, especially during this soccer season, my daughter is an encourager.  She compliments her teammates.  She congratulates them when appropriate.  After a game, she makes sure she tells each of them “good game.”  She is loyal.  Loyal to her friends, her team, her school.  She wants people to feel good about themselves.

As my daughter’s mother, I believe she’s beautiful, talented, intelligent, etc.  I realize part of that is simply the mother/daughter thing.  We as parents tend to be proud of our own.  Yet I realize more and more I need to compliment her on her character.  On her wise decisions.  On making good choices and being a good person.  I’ve known parents who scorn the “sportsmanship” award.  They desire their child be the all star athlete, the winner above all.  I’m competitive and so is my daughter.  Neither of us like to lose.  Neither of us are the “who cares? as long as we have fun” type.  I’ve found though, I’m extremely proud as a parent when Allie offers her encouragement to others.  It’s uplifting.

Chances are, she will not become a college soccer player.  Like the commercial, “she’ll go pro in something other than sports.”  But she has a lifetime ahead of her as an encourager.