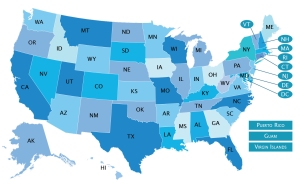 Our family has moved quite a few times.  San Diego to Wilmore, Kentucky.  Huntsville, Alabama back to Kentucky.  Memphis to West Virginia to Texas.  Eventually back to Kentucky for the third time.  This month marks ten years since we relocated again to the bluegrass state.

Before that move, we had never been anywhere longer than three years.  So Kentucky is definitely our home.

Reflecting on the past ten years can be overwhelming.  So much has happened.  So much has changed in our lives.  There’s a part of me that would prefer to go back to January of 2004 and live these ten years over.  Oh, I’d do so much differently.

Yet that’s an impossibility.  The present is the present.  All I have.  I would like a drastic change.  To wake up tomorrow thrilled to be alive, happiness gushing everywhere.  I will settle for a small bit of optimism.

I would like an abrupt turn.  An about face.  To change some things about myself pronto.  I’d like situations to change.  Answers to be forthcoming.  My daughter is going to study abroad next year in Europe.  I’d like to know, as would she, which country she’ll be sent to.

I am not a devout recipe follower.  If one teaspoon of cinnamon is called for, I’ll generally throw at least a half teaspoon more in.  I substitute ingredients.  I make due with what’s in the cupboard.  Yet I’d really like a life plan.  An exact map that states if I do ABC, then XYZ is guaranteed to happen.

I want change and I want to embrace it now.  Not next week or month or after we’ve lived here twelve years.  But change doesn’t happen overnight.  At least not lasting change that truly matters.  Self improvement takes time.  A new lipstick or hair cut doesn’t solve any problem that matters.  Nor does, “Hey, I’ve been behaving quite well for three days now….  I think I’ve got some of my issues under control.”

There’s a small voice inside me that tells me it’s time to move.  The voice, in an exaggerated way, emphasizes how long I’ve been here.  Longer than necessary.  It’s time to run.  Enough’s enough.  Because that’s been the pattern.  After a while, it’s simply time to go.  When taken literally, that voice is dangerous.  It’s comes across as a whim.  Yet when siphoned through with reason, it makes perfect sense that figuratively, it is definitely time to move.  In the growth sense.  It’s time to change, time to show movement.  Time to surrender while at the same time buckling down.

Relocations have fixed very little beyond aesthetics in my personal journey.  But a change of thinking, a change of the heart, a change for the better is what makes the difference.  Unfortunately, like I stated above, this type of change doesn’t happen overnight.

One thought on “doesn’t happen overnight”

yes I cried this morning...she says “I’ll be back” and I know of course she will, but it’s still hard to say goodbye...kind of an end of an era after a whole lot of years of orchestra auditions, concerts, trips, drives, celebrations, book club, girls group, job interviews, talks, moves, volunteering, eating and hanging out...so proud of the courageous young woman I’ve watched @amy._.lyon become...bon voyage Aimee! #kidsgrowup #goodbyedoesntmeanforever #bittersweet
Loading Comments...
%d bloggers like this: