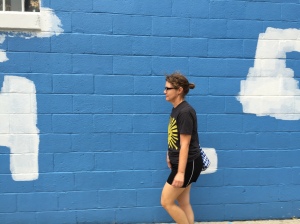 Here I am happily walking back from our neighborhood donut store. First of all, I feel quite privileged to live within walking distance of a donut store. And not only that, it’s actually the best donut store [yes, that’s my opinion, but I consider myself an expert, thank you] in my city.  I would throw in one of those #blessed dealios, but I find them obnoxious, so please disregard that I considered doing so. Anyway, I do not like it when people spell donut as DOUGHNUT because it’s an unnecessary use of letters and it puts the focus on “dough” but this entry isn’t about spelling.

My daughter has decided she thinks it a good idea if she and I become vegan for a month. She is the daughter [I actually only have 1 daughter] who influenced me, five years ago, to become a vegetarian. I have handled that change of eating quite well, never really missing meat all that much, if at all. But now…….choosing not to eat cheese, eggs, and other dairy foods will be rather difficult. I like cheese a lot. And chocolate is my friend. And for gosh sakes, it’s July and I like ice cream. But none of these are vegan so……there’s that.  Well, you can access vegan versions of them, but I don’t imagine they are the same. It’s going to be fruit, vegetables, beans. Rice, avocados, and thankfully, Clif Bars which I just found out are vegan. Lots of bananas with almond butter spooned on. And no more donuts. One of my life rules is if you wake up in my house on Sunday morning, you get a donut……from our neighborhood donut store which is the best in our city [as stated above]. Well……no donuts for anyone for a month. UGH!

I think we’re both going to lose some weight. Which in my case, I look forward to. Because I eat too many donuts.

People often ask questions about me being a vegetarian. I find this interesting because I rarely ask people questions about eating animals. Now, I’m certain people will be even more curious as to why I’m doing this. And though I don’t really feel the need to expound, I will share a bit.

Incidentally, the vegan lifestyle will coincide with my birthday this year. So, please keep this in mind if you are planning to take me out to eat, or send me chocolate, or…..okay, so you most likely weren’t going to do any of that, but that’s okay. Another thought is my shoe size is 7, and I am a shoe person…..although I think vegans are supposed to be against leather, so that might be a challenge. Anyway, happy eating [and no, I’m not expecting anyone to send me shoes].