I started writing this post months ago. For whatever reason, I never posted it. After reading and editing and adding/subtracting….I decided it was right for today.

Okay, so I wrote the above…I’m not sure when. Apparently I decided it was not right for that day either. So there you go.

How did I let myself get into this?

I ask myself. Often, as of late.

Why do I care?

When you return from a work conference, people ask? “What’d you learn?” “What were the takeaways?” Etc.etc.etc.

Late in the summer of 2015, my work took me to Philadelphia, and upon returning people asked and I answered. Truthfully. I was prepared to give a brief synopsis. Blah.blah.blah.

Honestly though, I’m a processor….and what stuck with me…..what continues to…..is a photo of a boy in a casket. Somewhat daunting, perhaps. Not what I asked for. Only on the screen for a brief few seconds. Not what I necessarily imagined the couple days of meetings and speakers would entail. And for the most part, tragic death of teenage boys was not the subject matter discussed. Just one presenter. One guy who befriended a kid who ended up dead in a drive by shooting……and I can’t help but think……….what if? One of our boys. In our program at work. Because it has happened. A drive by shooting. And could again. Or what if something else? Trouble brought by circumstance? Wrong place at the wrong time. Wrong person. Then what? Yes, I’m being dramatic. But it puts me on edge and I almost wish I didn’t care. It would be a heck of a lot easier.

So I wrote the above. And again, never posted.

I wrote the following today. Really…..

Not too long ago I drove. My friend and a young lady who is in high school. To a University of Kentucky football game. We met some other people there. Free tickets donated to our workplace. On the way though, the young lady described her sadness in knowing a young man who had been shot. And died. It had happened, if I remember correctly, the night before.

Then, less than a week later, the unthinkable happened. HER brother was shot. And died. He was 14 years old….still in middle school. I remember very clearly dropping her at her house that Saturday before. Watching her enter. Making sure she got in as is my normal procedure when dropping kids off. Her brother was shot in that very door way and it breaks my heart. The entry to her home.  My friend, the one with me when we drove her…..has been a comforter. Has been there for the girl. In a situation no one is ever prepared for.

I have a photo of her at the game. Another of a race we ran together. But I won’t post them here. It doesn’t seem appropriate or comfortable, so I will not. Her story is not really mine to tell. It’s hers. Yet once you’re in. In the know with someone, I suppose you play a part.

There are reasons. Always reasons. Yet none. None tangible. None easily identifiable. I ran four miles on Friday and spent a good portion of it asking God in my mind why in the world HE allowed this to happen. Why a fourteen year old died on Thanksgiving. In case you’re wondering he didn’t answer. And I don’t suspect he will.

I keep this photo on my fridge. The boys in it have no idea. I doubt they even know the photo exists. They are much older and larger now. Today. And truth be told, I don’t really know them. I know other kids better. Know other kids’ stories. But I like this photo. It was taken before I worked with kids so much. Before I knew as many ins and outs. When I mainly sat at a desk. Now it reminds me. Whether consciously or not, that I care. Maybe it’s the gym bleachers I like. The environment. My dad….teacher and coach in a gym of boys. The connection with him?  Who knows…really? 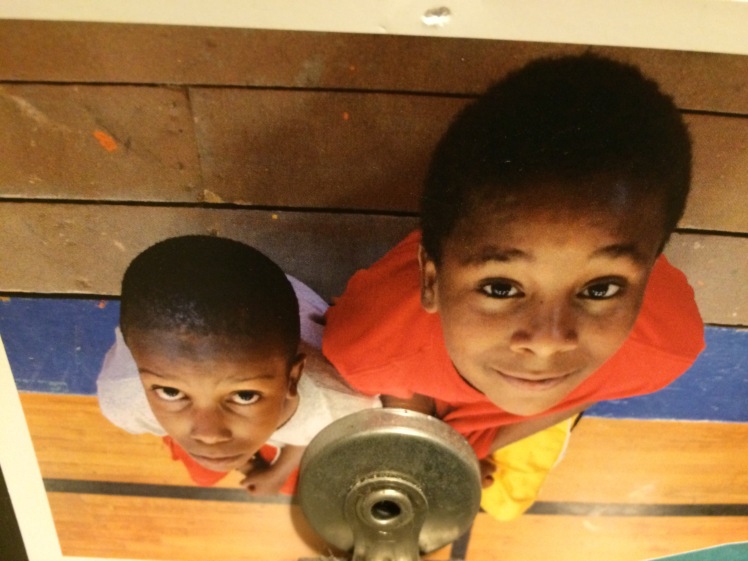 Sometimes I envy people who don’t care. Who can see the photos and hear the stories and remove themselves. Completely and entirely. Move out. Away. Don’t even know anyone who…..

So there it is. My rather emotion filled entry for today. I suppose I care because I can’t imagine not. Because once you know, once you’ve made the connection and begun the relationship, how could you ever go back?

I took this picture today. Two little boys happy to ride in the backseat. Not wanting to listen to Christmas music. At first not wanting their picture taken then deciding….hey, why not? 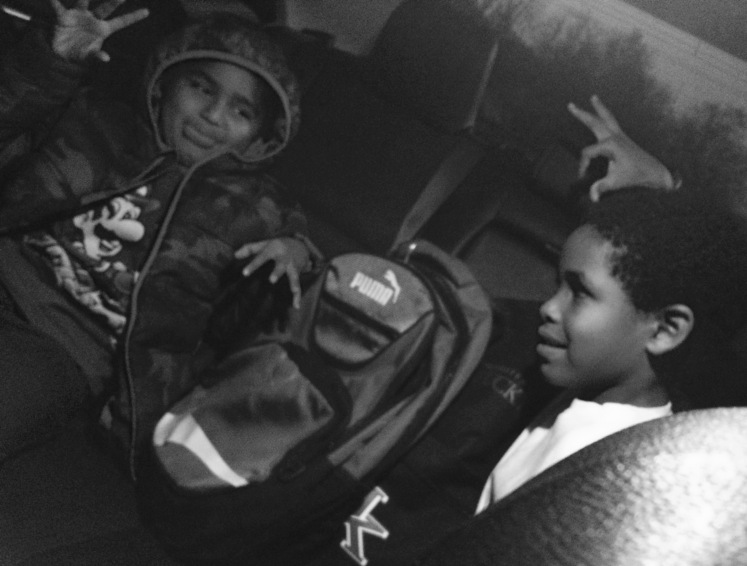 “Picture me.” That’s what one of them calls it. Instead of “take my picture” or “take my photo”. So I did. I pictured them. Then said goodbye. I watched, of course, as each walked into his house, making sure they were in before going on about my evening.