If you are not familiar with the term ombre, I suggest you GOOGLE it.  It seems to be popular now, in hair, in nail color, in furniture painting, decorating, etc. Basically, if you can change the color of something, ombre is a possibility.

After much [and I emphasize much] consideration, my teenage daughter decided upon ombre hair. We recently tried a blond dip dye, to no avail.  Her hair, already blond, did not show a definite difference in shades.  On Saturday, she leaned towards purple.  As in, a subtle, purple dip dye.  Again, if you’re not familiar with what a dip dye is, by all means, utilize GOOGLE.  I will not take the time to describe or explain.  But alas, all we could locate in the purple dye department was something akin to what punkers use.  Actually, I think it is what punkers use.  Since daughter Allie is not a punker, she wasn’t willing to go as dark as they are.  Come to think of it, is there such a thing as punkers in this day and age?  Anyways, on Saturday evening, after visiting Walgreen’s with her dad, she came home with an ombre kit.

Why she trusts me to dye her hair is beyond me.  But she does.  I, personally, am not a fan of hair dye.  I prefer the natural methods of coloring one’s hair.  I use henna when my gray becomes unbearable.  Sure, in my youth I highlighted and applied Sun In.  I became a blond during my college years.  But that was a long time ago and I lived mostly in California during that phase.  Enough about me…..  Dear, sweet Allie wanted a change.  So, a change we attempted.  It’s a bit difficult to tell from this photo, but I do believe the ombre dye was a success.  Her hair is lighter on the ends and darker on top, which is what we were trying to achieve. 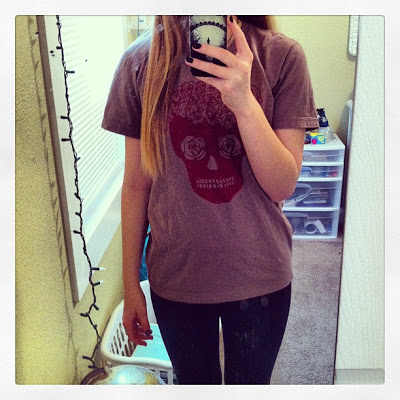 Having a daughter is an adventure.  Often a stylistic adventure.  Allie chose to spend some of her saved money on a subscription to Vogue.  She and I watched the documentary September Issue together.  Then she read Grace:  A Memoir, which is about Grace Coddington.  And now I’m reading it.  She follows Cara Delevingne, has numerous magazine cut outs of Cara on her wall, and knows when Fashion Week occurs.  [Yes, I realize Grace and Cara are not everyday type people, so again, by all means GOOGLE if you’re unfamiliar.  Were it not for Al, I would be.]  Allie will shop at American Eagle, but prefers Topshop.  She believes in putting together an outfit, not just wearing a shirt and jeans from a popular store together.  There’s a difference [in her mind and I agree].  And she photos herself and posts her outfits on Instagram on a regular basis.  I don’t think posting them has anything to do with arrogance, I think she just enjoys fashion as a hobby.

I believe we as a society, especially those of us who have at least some compassion and mercy in our hearts, often see fashion as frivolous.  Yet I’m not sure it’s anymore so than sports or music or art in other forms.  While I would never condone demeaning anyone because of their attire, I would also not discourage a star athlete from accomplishing anything possible.  See, I’m not sure there’s a difference in a 6’10 basketball star and a 5’10 thinly built girl who might end up on a Paris runway.  They’re both using what they’ve got, so to speak.

Enough of my mini sermon on the art of fashion.  If you know me today, you realize I’m not exactly a fashionista.  Yet there was a time when I enjoyed clothes much more.  I have very fond 1980s memories of diving into boxes of my aunt’s old clothes from the 1960s.  My grandmother let me take what I wanted and interestingly enough, people complemented me when I wore many of those items.  Today we’d call them vintage.  Then I called them my aunt’s old clothes.  I still love a good thrift store adventure.  And I quite honestly would never buy my clothing at Chico’s, even if I could afford regular trips there.  For one thing, Allie would not approve.

Our family visited a shoe store on Saturday.  Husband Chip needed a new pair of shoes.  While he shopped, I looked through the women’s clearance section.  I found a pair of shoes I liked.  Allie even liked them.  Son Jamie, well he disagreed.  When I pointed out a pair of ballet flats, he mentioned they were better suited for me.  So, honestly I cannot win.  Not as far as pleasing my kids.  My son thinks I should wear less makeup.  My daughter, more.

Teenagers are fun.  Once they move on, I figure I can wear what I want, unapologetically. Until then, well, it’s always a risk to walk downstairs in the morning.

“Mom, what are you wearing?”

That question is heard often.  I suppose it’s a bit like peer pressure, yet my kids are not my peers.  On a positive note, Allie did give up spending for Lent.  My husband and I did not push her that direction.  We did not require our children make a sacrifice for the season.  She came up with this on her own.  I’m proud of her, because she likes to spend.  So no new shirts or pants or socks until after Easter.  We did buy the ombre kit for her.  We’re nice that way.